The current issue of Asimov's Science Fiction contains (among other stories by a wonderful array of writers) my short story "Good Show." Let me know what you think. 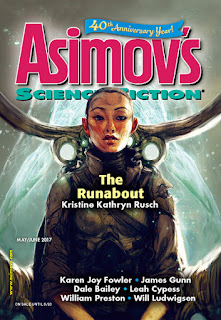 Posted by William Preston at 7:58 AM 6 comments:

No, I hadn't read this before. No, haven't seen the movie.

However, as soon as Sam Spade called someone "Sweetheart," I heard Bogart saying it, and something about the character—really, all the characters—fell into place. Everyone is performing.

You probably know the plot's essentials: Detective Sam Spade is tasked by a woman of questionable backstory to protect her from harm. Her tale is a ruse, and Spade is sucked into a quest for a centuries-old object of great value . . . and even more questionable backstory. There are murders, punches, and many guns drawn. (Oddly, though quite a few people are shot, every time we see a gun produced, it's quickly rendered useless; as in a Greek drama, the murders take place offstage. One man does drop dead at Spade's feet, but he's been shot (half a dozen times, supposedly) elsewhere.)

From the first scene, Spade is performing, not telling us what he truly thinks—either about the new case or about his soon-to-be-late partner. With every person he meets, he adopts a radically different tone. Much of Hammett's description focuses on Spade's changing face as he moves through responses and selects the one most useful for the moment at hand.

The other characters, as well, are performing. Some of this is the narrative's problem: everyone seems to be playing a scripted part, reciting speeches that announce who they are—though, in every case for the main players, who they are is concealed by these words. The leader of the gang in search of the Maltese falcon may be the most honest, but even he manages some late moments in which he alters the expectations of other characters in response to changing circumstances. It's fitting, because the falcon in question is, itself, a performer, a deceiver.

I expected storytelling more along the lines of Chandler, but the writing isn't nearly as good. Most of the time, it's direct and efficient, and when it isn't, it falters. Baroque metaphors and phrases leave the reader puzzled. Phrasing is sloppy, as when Spade checks his watch "on his wrist" (where else might it have gone?) or he rides down from a hotel's upper floors "in an elevator" (as if we hadn't considered that elevators provide rides). Hammett sometimes finds himself at a loss for a bit of interstitial description and usually reverts to the details of Spade's face once again.

It's easy to see why Hollywood thought this would make a great movie. The characters themselves behave cinematically, trying to persuade anyone who is watching, making wild gestures on the story's stage in the hopes that they aren't the next to be dispatched, permanently, to the wings.
Posted by William Preston at 3:00 PM 4 comments:

At a small independent school, I teach ESL; I've taught 11th-grade English, AP Literature, and creative writing. My short stories have appeared in Asimov's Science Fiction, and in 2006 I won the Zoetrope: All-Story annual short fiction prize. My poetry and nonfiction have appeared in various journals.

PICK UP SOME OF MY PUBLISHED FICTION

And you've done what exactly?